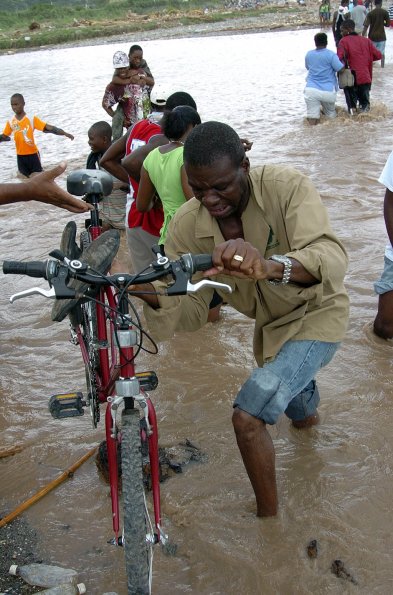 Peta-Gaye Clachar/Staff Photographer
These people make their across this murky water at the Harbour view bridge on Saturday, August 30, 2008. Thousands of people were seen carrying suitcases for those who had a plane to catch, shoes and clothes in bags to change into and also people on their backs. Hustlers were by the side lines collecting $100 to take people accross and $200 to take people on their backs which didnt seem to a problem as they were eager to be able to have found a temporary way to travel to and from their destinations. One doctor said he was working at the Princess Margaret Hospital and also got trapped at the Hospital because of the Harbour view bridge that collapsed during the passage of tropical Storm Gustav on Thursday.

Powered by zenphoto
The opinions on this page do not necessarily reflect the views of The Gleaner. The Gleaner reserves the right not to publish comments that may be deemed libelous, derogatory or indecent. To respond to The Gleaner please use the feedback form.